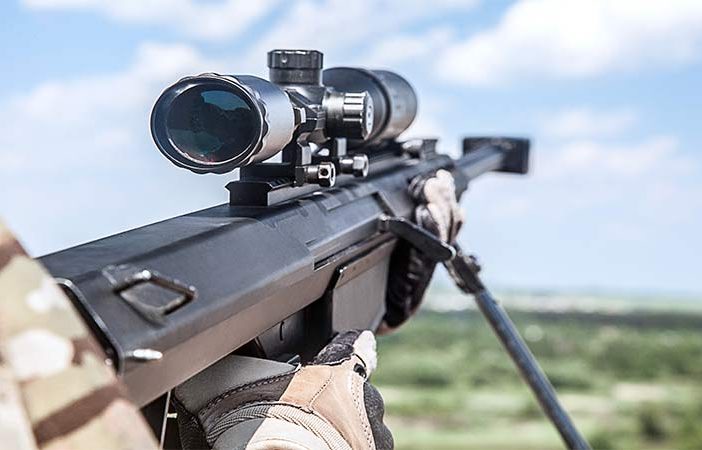 When it comes to choosing the right equipment for your rifle, it’s important to decide what kind of reticle works best for you. While the reticle is physically one of the smallest components of your shooting game, it’s key to perfecting your shot. From Christmas Tree to BDC reticles, you have a wide range of types to choose from; however, sometimes the simplest options are the most effective, such as a 30/30 reticle.

Also known as a duplex reticle, the name of the 30/30 reticle refers to its view at 4x power. When shooting at this setting, the subtension, or the length of the thinner crosshairs, converts to 30 inches both horizontally and vertically.

If you’re in the market for a new rifle scope or trying to find the right reticle for you, you might want to explore more about how they work and where they fit among other types of reticles. Read on to learn about how the 30/30 reticle compares to alternative categories, how to use it, and how to choose one for yourself.

Many hunters consider the 30/30 reticle to be the best all-purpose reticle. While other styles may have extra lines and features to offer helpful guidelines for the shooter, the 30/30 reticle is simple and easy to use.

Many say that it’s especially useful for big game hunting or shooting in thick brush because the thick bars are easy to see over complex backgrounds.

A 30/30 reticle, also known as a duplex reticle, is the most common style found on hunting rifle scopes. It has heavy crosshairs that thin out in the middle, which enables the hunter to quickly find the center of the scope while still allowing them to line up their shot precisely.

This design also allows shooters to estimate the range based on the size of the target. While it requires some calculation and estimation, a well-practiced shooter can get pretty accurate shots.

Mil Dots are similar to 30/30 reticles, with the same basic structure of thicker posts on the outside and thin crosshairs in the middle.

However, Mil Dots also include an additional feature of small dots along the thin lines on the reticle. Each dot represents one milliradian (mrad), which converts to 3.6 inches at 100 yards.

These dots can help shooters achieve more precise shots on their targets, as it’s generally easier to center a dot on a target than to eyeball it.

Mil Dots are typically for snipers and extreme long-distance target shooters, but hunters can also benefit from using them for long-distance shots.

However, the added precision of Mil Dots can translate to a higher price point, and most hunters will probably be fine with a regular 30/30 reticle.

If you’re still curious about other types of reticles and how they differ, check out this 9-minute video about Mil Dots vs. bullet drop compensating reticles:

As previously mentioned, the subtension of a 30/30 reticle represents 100 yards at 4x power. This conversion scales up and down based on the range, at 15 inches at 50 yards, 60 inches at 200 yards, etc.

It’s also important to remember that if you adjust the magnification, the size of the reticle changes relative to the size of the target. However, for this example, I’m going to focus on a scope at 4x power.

Let’s say you’re hunting in the woods, and you see a white-tailed deer in your rifle scope. Its shoulder comes up to about half of the subtension on your reticle.

Knowing that a white-tailed deer has an average shoulder height of 34″ and that half of your reticle’s subtension represents 30″ at 200 yards, you can estimate that you’re a little bit more than 200 yards away from the target.

From there, you can calculate bullet drop and position your shot based on the appropriate holdover or hold under.

While this can sound a little bit complicated to do on the fly, a general trick is to know the subtension at every range and know the approximate size of the object you’re trying to range.

Even within the category of 30/30 or duplex reticles, there are several varieties to choose from, including fine, heavy, wide, illuminated/non-illuminated, and more.

You can also find 30/30 reticles under a variety of names depending on the company selling it, such as Nikon’s store, and Simmons’ Truplex.

Riflescopes can span a wide range of prices; from cheap to expensive scopes. While you can typically get a quality piece of equipment for $250-350, some can cost as little as under $100 or as much as thousands of dollars.

Some experts suggest guidelines for how much you should spend on a rifle scope, like the 2:1 rule of getting a scope that’s half the price of your gun. On the other hand, others may urge you to spend as much as you can.

Ideally, you should make a final decision based on which one best suits you and your gun, rather than how much it costs. Here are some of the best scope for 30-30 duplex rifle scopes that I’ve found on Amazon:

Final Thoughts: What Is a 30/30 Reticle on Rifle Scopes

Hopefully, this article was able to help you learn everything you need to know about 30/30 reticles and how to start choosing and using a 30/30 reticle rifle scope. As you get used to your new reticle, give yourself some time to adjust.

Just like in any skill, practice makes perfect, and the more you shoot with your new rifle scope, the better you’ll get at using it to gauge your distance and line up your shot.