You are here: Home / Recipes / How To Make Perfect Fried Chicken

Cooking the perfect fried chicken does not apparently look to be a very daunting task. However, getting the right taste and crispiness might not be that easy every time. With the desire to cook the best fried chicken and with the right tips up your sleeves, you can cook fried chicken that would compete with the ones that are found packed in supermarkets or served in restaurants.

By the end of this article, you would not be able to decide that which one was easy to learn, how to make those mouthwatering perfect fried chicken.

The process of cooking

1. Choose the dimensions of the pieces

The most important part for making the perfect fried chicken lies in choosing the dimensions of the pieces. Although chicken drumsticks are more preferred, you can also use the breast pieces of chicken. While cutting the pieces out of the chicken breasts, you need to ensure that these are cut in half crosswise.

If you want to use the whole of the leg quarter, slice it into two, separating the chicken drumstick and the thighs. This way all the pieces would get evenly sized to get evenly cooked at the same time.

2. Submerge the chicken into brine 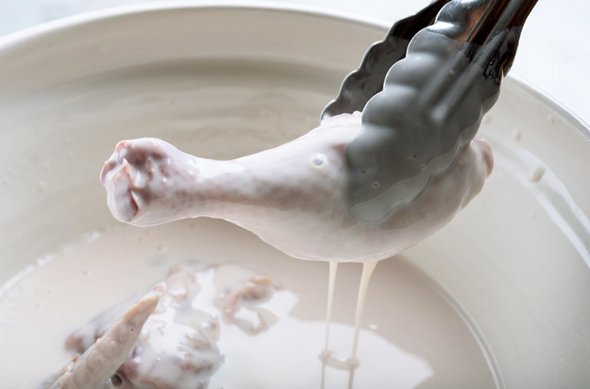 The next important step is to submerge the cut pieces into brine. This would make the chicken soft, tendered and flavored (if you add any flavors to the mixture).

Assuming that you would be cooking 4 pounds of chicken, you need to take half cup table salt, 2 quarts of water, half cup sugar, a couple of beaten eggs, some flour and mix them well. You can also use buttermilk in place of beaten eggs in case you are allergic to eggs.

Now you need to soak the chicken pieces in this solution for about 30 minutes to one hour. Do keep an eye on the watch as anything more than an hour could make the salt get into the meat more than required. That would make the meat too salty and the taste would be ruined. 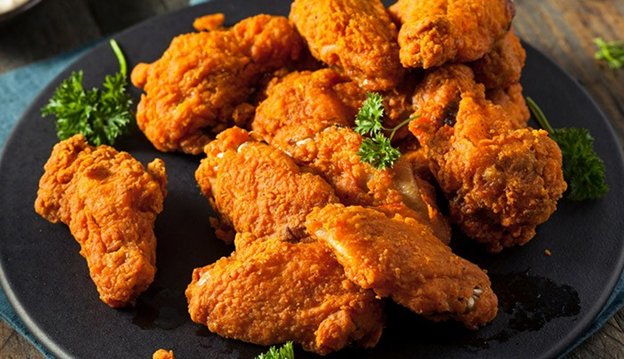 Take a frying pot and fill it halfway with frying oil. You need to heat the oil to about 350 degrees. Anything more than that would tend to burn the outer layer of the chicken as soon as you merge it in the oil.

Before dropping the chicken pieces into the hot oil, you should be rolling them into some cornmeal or breadcrumbs as that would give the desired crisp and the right texture to the fried chicken.

Although it might look like more time consuming, but while making perfect fried chicken it is wise to cook the chicken in batches.

Even though the pot can accommodate, try to avoid cooking more than two pieces at one go. This way you would be able to fry the chicken evenly on all sides and get the right crisp out of it.

Even after cooking the chicken properly, if the results are not as desired, you would need to understand what caused the debacle. One of the most common problems of cooking fried chicken is that the chicken remains under cooked.

The primary reason behind this could be either the oil temperature of the unevenness of the size of the chicken pieces.

If the oil temperature is higher than specified, as soon as you add the chicken it would fry the outer layer which would turn brownish soon enough. As the color of the chicken turns browner, you would get the feeling that it is now time to get it off the flames to avoid overcooking.

Another unwanted result while making fried chicken is that the chicken becomes greasy fried. The only reason behind is the cold oil. If you have the minimum idea of cooking, you would know what happens when you add stuffs to cold oil.

As you add cold chicken pieces to cold oil, it would tend to get clumped and the whole effort of making the perfect fried chicken would get down the drains.

Some common mistakes while frying chicken

It is true that no matter whether you cook some chicken recipe: chicken piccata, chicken salad, chicken wings, toaster oven chicken…. or simply fry the chicken, you need to put in a lot of efforts.

After all the efforts that you would be putting in to making the perfect fried chicken, it would be really disheartening if the food doesn’t turn out to be at par with your expectations.

Given below are some common mistakes that people tend to make while frying chicken.

Using cold oil – You now know the impact of this and how to avoid this mistake.

Using the chicken from fridge – Chicken from the fridge would be way too cold to get cooked properly. Either thaw the chicken properly to get it back to room temperature or use freshly cut chicken. Cold chicken would become greasy when fried.

Using oil that has low smoke point – Chicken that gets fried in oil with low smoke point (like olive oil) never becomes tasty to the tongue as it doesn’t get enough heat to get cooked properly. You can avoid this by using neutral tasting oils like canola oil, peanut oil or vegetable oil. These oils have a high smoke point as well.

Using paper towels to soak the oil and cool the fried chicken – all it does is make the fries soggy. As you keep the chicken pieces on paper, it would start steaming and the crisp would vanish in thin air. To avoid this, use wire racks sets over some baking sheets. That would cool the chicken fries, dry it and make it crispier.

Just avoid these mistakes and follow the above mentioned methods. No one would be able to stop you from making those mouthwatering, yummy looking and super tasty fried chickens.

Embed This Image On Your Site (copy code below):

Paula is the founder of FoodRevPgh, where she blogs about the best food recipes, tips & tricks, and finest tech that will help you make exquisite food in your home. You can find many delicious recipes, resolved problems that you can face when cooking.