You are here: Home / Woodworking / How to Choose Sandpaper: The Right Grit and Type for All Kind of DIY Job 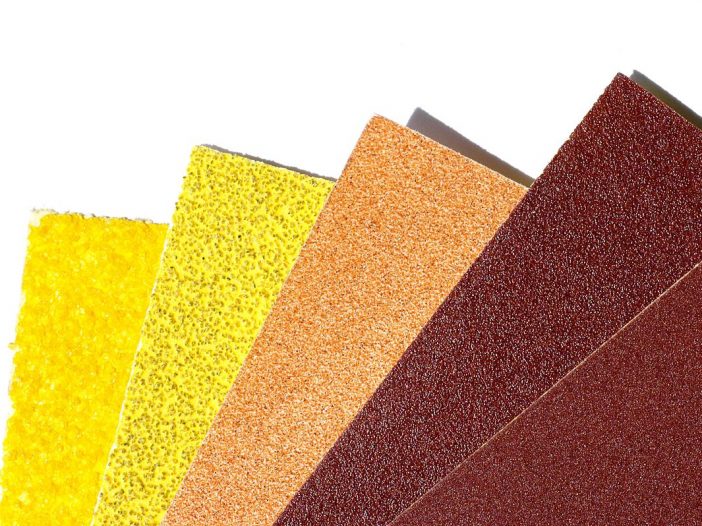 Sandpaper is deceptively complex. Although it looks simple, each type has different properties useful in specific situations.

When working on a DIY project, the right type of sandpaper will help you finish the job quickly and with great results. However, using the wrong type can result in scratches and other damage to your project.

Whether you’re a beginning DIYer or a veteran who needs a quick refresher, here’s a closer look at how to choose the right sandpaper grit and type:

Grit is the term for the fine abrasive particles on the sandpaper. These particles aren’t made of sand. Instead, they consist of either natural or synthetic sources. The particles are sorted by grit size during the production process by using large screens and other techniques.

CAMI ratings range from under 20 (incredibly coarse) to over 3,000 (amazingly fine). However, those are the extremes. Most DIY projects typically require sandpaper in a range from around 80 to 400.

CAMI is the grit rating used within the US. It’s what you’ll see when shopping in a store or ordering from an American company. However, it’s not the only rating used.

The Federation of European Producers of Abrasives (FEPS) is the grit rating system used throughout the EU. Identifying a FEPA rating is easy because it starts with P, followed by a two or three-digit number.

Generally, most sandpaper you’ll buy will have a CAMI listing. But if you find FEPA-rated sandpaper you like, converting the rating to CAMI is usually straightforward.

The grit rating determines the density of the particles. However, that’s not the only important factor to consider. The type of grit sandpaper also matters.

As mentioned above, sandpaper isn’t made from sand. So, what is it made from? Here’s a closer look at the most common materials:

This synthetic material is known for its durability. It’s most commonly used for sanding hardwoods such as oak, maple, and walnut. Additionally, it’s often used to sand and polish a variety of metals, plastic, and drywall.

Emery is a natural material that effectively removes corrosion. It’s mainly used to polish metal. Generally, you shouldn’t use it to sand wood, as the sharp grain will likely scratch it.

Garnet is a softer grain ideal for hand sanding of fine wood. However, it does wear out quickly, so plan accordingly when buying. Additionally, garnet isn’t a good choice for sanding metal because it’s too soft.

Most garnet sandpaper has a reddish-brown or reddish-tan color.

Flint is one of the best materials for sanding. It’s durable but remains gentle enough to avoid scratching. Flint sandpaper is usually the preferred product for removing paint and varnish from wood.

This is an exceptionally durable and versatile synthetic material. You can use it on both hardwoods and softwoods as well as metal and plastic.

Zirconia alumina is a synthetic material known for its durability and abrasion. It’s mainly used with power sander such as, benchtop sanders. It’s effective at polishing metal and sanding rough wood.

Coarseness of the Sandpaper

While the CAMI rating system provides useful information, manufacturers understand that customers typically prefer a simpler method of learning how to select the right grit number and type for sandpaper. Most manufacturers typically assign what’s called a coarseness level to each of their products.

The coarseness level represents a range of grit sizes. Each level corresponds to a type of project. Although specifics can vary by brand, most manufacturers use the following general system:

This is the toughest, most abrasive type. It has a grit range between 24 and 36 on the CAMI scale. You only want to use it in specific situations. Otherwise, you risk severely damaging whatever you’re attempting to sand.

Extra-coarse sandpaper is mainly used to remove varnish and old paint. It might leave behind light scratches, so it’s usually best on objects that you’re planning to paint after sanding.

Coarse sandpaper usually has a grit range between 40 and 50. It’s ideal for woodworking, especially rough shaping. Additionally, it does a good job removing light finishes, such as polyurethane.

The next step up from coarse, medium sandpaper is also mainly used on wood. However, instead of rough shape, it’s best for more precise, final shaping.

It’s also a good choice for removing small cuts, indentations, and planning marks. The grit range of medium sandpaper is between 60 and 100.

Fine sandpaper is used to apply the final touches on a project. It ranges from 120 to 220 grit. While the sandpaper isn’t coarse enough to shape wood, it does help create a smooth surface before applying paint or varnish.

Sandpaper has three types of backing:

Not only does sandpaper not contain sand, but it also doesn’t even need to contain paper! While you can still find plenty of paper-backed sandpaper, fabric and film provide several unique advantages such as increased durability and comfort.

Fabric is the best option if you want to use the sandpaper when it’s wet. Sanding with water helps reduce dust build-up. It also helps the sandpaper last longer, because it prevents it from getting clogged with particles. However, you don’t want to use water when sanding.

The density of the abrasive material helps determine its project suitability. Sandpaper can have either an open or closed coat:

An open-coated surface has space between the grains. The dust generated from sanding can fit into this space, which allows the sandpaper to still work effectively because it doesn’t clog quickly. It’s the best choice for softwoods such as pine. Most sandpaper used with woodworking power tools is also the open coat type.

Closed-coat sandpaper clogs much faster, so it loses its effectiveness far quicker than the open-coated type. However, that’s not a big deal in many situations. Use sandpaper with a closed coat when hand sanding hardwoods and metal.

Check our article on beginner friendly diy projects you can do right in your backyard: 8 DIY Backyard Woodworking Projects for Beginners

If you’re shaping the wood, you want a fairly coarse grit, usually 80 or lower. The materials garnet, aluminum oxide, and zirconia alumina all tend to work about equally well for general shaping.

However, you want to increase the grit somewhat if you’re sanding hardwood. Use a grit between 100 to 220. Aluminum oxide is usually the best material with hardwood.

Sandpaper with a grit between 100 and 220, made with garnet or aluminum oxide, is usually the best option for smoothing bare wood you plan to paint. If you plan to stain bare wood, use the same material but choose a narrower grit range. Between 100 and 150 should work best.

When sanding painted wood, its condition makes a difference in the type of sandpaper you’ll need. If the wood’s in good condition, use 180-grit paper with aluminum oxide or silicon carbide. However, if the wood is old, splintered, or otherwise in bad condition, then you’ll need 80-grit paper.

When sanding wood floors, you’ll want coarse sandpaper with a grit no higher than 80. Garnet is usually a good choice for this job.

Zirconia alumina and aluminum oxide both work well on metal. Use 80-grit or lower if you want to remove burrs. To remove rust, use a grit of 100 or lower.

Hand tools every beginning woodworker should have: Hand Tools for Woodworking Beginners

Learning how to choose the right sandpaper grit and type will help you conquer all types of DIY jobs, from carpentry to plumbing, and more. Before work begins, take a few moments to select the right sandpaper for your needs. You’ll accomplish your DIY tasks easier and faster!