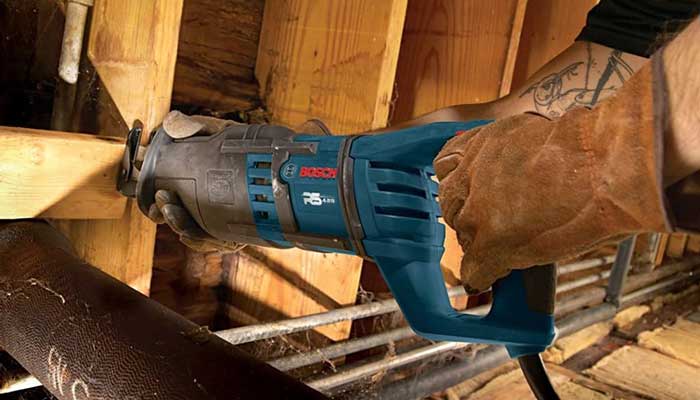 Few reciprocating saws can compare to the Bosch RS428 14 Amp Reciprocating Saw. It has more power than many other saws in its class and it has some extra features for more efficiency.

As you’ll see in our  Bosch RS428 Reciprocating Saw Review, it has what it takes to cut through different types of materials including metal, ceramic, plastic, and wood.

The vibration control is close to perfection thanks to the counterbalance system. However, the fact that you can’t fully control the orbital action makes the use of the device limited.

Also, the retail price of the device is high as it costs almost $150 to purchase one.

If you have any experience with hardware tools, then you know that Bosch is one of the best manufacturers of these tools out there.

Whether you’re looking for a chainsaw, benchtop planer, band saw or even a reciprocating saw, you can find the perfect fit for your woodworking needs in one of the famous Bosch series.

Since you’re reading this article, your current interest is a reciprocating saw. As you’ll see from our review, this product is one of the finest handheld power tools manufactured by Bosch and it is going to make a perfect addition to your workshop.

It has an innovative counterbalance system, and great power to weight ratio among other features.

Vibration is something every woodworker hates in a reciprocating saw for many reasons. When the vibration is too much, it will be difficult for you to maintain a comfortable grip and as long as the blades move whenever you put on the saw, it is going to vibrate.

If you put on thick working gloves, you’ll hardly feel any vibration when the Bosch RS428 Saw is in use. This feature also comes in handy because of the constant orbital action.

Constant orbital action is a useful feature on a saw. Typically, the blade on saws cut in a straight in and out stroke. Orbital action refers to a slightly circular motion of the blade as it moves in and out of the material you’re trying to cut.

However, since there is a great counterbalance system as stated above, it buffers the extra vibration that comes with the orbital action. Unfortunately, the Bosch RS428 14 Amp Reciprocating Saw doesn’t have a control switch for orbital motion.

So, you can’t get straight strokes. This makes it a great option for demolishing cuts. While it can cut metal, it might lack the precision you’ll typically get when you’re trying to cut metal with a straight stroke.

The Bosch RS428 Reciprocating Saw is called the strongest in its level because of the powerful 14 Amp motor. Thanks to the strength of the motor, the saw can cut through different types of materials with little to no challenge.

The motor uses a soft start switch that allows you to ease it into full speed when you push the trigger. The soft starter has many advantages over regular starters. One of the major benefits of the soft starter is the reduced power surge which leads to energy cost reduction.

It also offers more power at all load cycles thus leading to a reduction in kVa. This soft starter technology is overall more reliable than conventional starters.

It also increases the lifespan of the motor because the load on the mechanical components reduces significantly when you ease into the process. You’ll hardly ever have overheating problems with the motor because of this soft starter feature.

The Bosch RS428 14 Amp Reciprocating Saw comes with Constant Response Electronics. This technology allows the motor to run smooth and steady irrespective of the material you’re trying to cut.

While the device has a 12 Amp motor, the weight to power ratio is just perfect. It weighs about 8 pounds and this is the average weight of a handheld reciprocating saw. It’s not too heavy and it’s not too light either. This is one of the reasons why it has counterbalance.

From our review, you can see that it is not called the most powerful reciprocating saw for nothing.

Everything about it from the 14 Amp motor, the orbital action, the counterbalance system to the constant response electronics is amazing. All these features make it a little expensive but it is worth every penny.

The constant orbital action is great but it makes metal cutting less precise than necessary. It would have been better if there was a switch that allows you to on or off the orbital action feature at will.