You are here: Home / Outdoor Sports / Air Bike vs Spin Bike – Which Type of Workout Bike Is The Best? 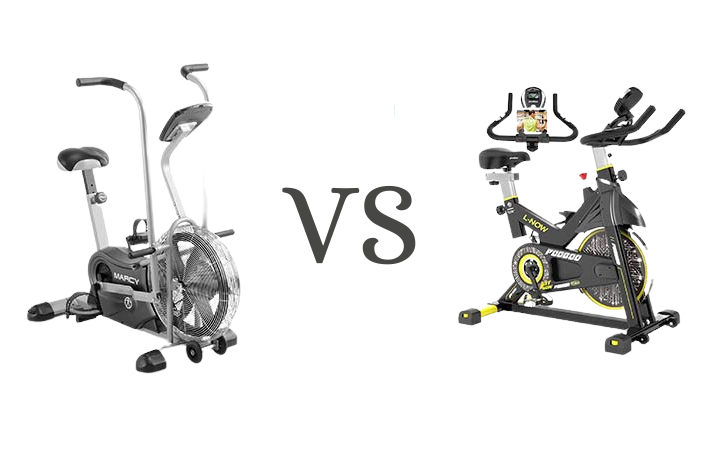 Indoor cycling machines are very popular, as they allow you to get your exercise done at home without going to the gym, even if it is cold and snowy outside. However, various kinds of exercise bikes are available, including the air bike and the spin bike.

If you wonder which types of exercise bikes are better for your needs, this article is for you. Today, I will compare these two types of bikes to help you decide which one to buy, and discuss the different mechanics of these two bikes and the effects they have on your body. Let us get into it.

Air Bike vs Spin Bike: What Are They?

An air bike is a stationary bike that uses body-generated resistance to push against your efforts. However, in addition to pedals, there are also handlebars that you operate with your arms.

Your arms will also be working against the resistance of the wheel. You can operate air bikes with your feet only if you wish.

Spin bikes, on the other hand, is lacking moving handlebars. It was designed to mimic a regular road bike. Many spin bikes let you set the resistance, giving you more control over your workout.

Other spin bikes have screens that allow you to join in on group workouts. For example, you can work out together with a friend who has the same model if you both turn on the screen. Some spin bikes also show heart rate, calories spent, distance covered, etc.

Leg vs Full Body: Which Type of Workout Bike Is Better for Cardio and Calorie Loss?

If you want a total body workout instead of only a leg workout, which exercise bike should you get? If you want to work out your arms in addition to your legs, will a spin bike suffice?

Since air bikes have handlebars that you can move with your hands, unlike spin bikes with handlebars that do not move, you will be getting a total body workout when you work out on an air bike.

You will be engaging not only your feet but also your hands. If your goal is to get a full-body cardio workout, I would suggest getting an air bike.

However, that is based on the assumption that you will be moving your feet against the same resistance level as you would on spin bikes.

Other factors play a role in how many calories you burn, not just how much of your body you are moving. For example, if you have more resistance, you will be working harder, thus burning more calories.

However, it is not just about how many calories you burn. You may want to develop your upper body a bit. If you use air bikes, you can get some muscle development in your arms and even in your abs and chest, as you will be moving them back and forth.

A spin bike, on the other hand, does not have any handlebars. As such, it is closer to a road bike, in which you won’t be moving your arms much.

If your goal is only to get a bike indoors for when it is cold and rainy, or if you only want to work out and develop your lower body, then a spin bike is a good idea.

There are several types of cardio workouts out there. Some people prefer HIIT cardio, while others prefer steady-state cardio. Which bike is better for which type of cardio?

A lot of people use air bikes for HIIT cardio. HIIT stands for High-Intensity Interval Training. The thinking here is that you can save time and still get the same exercise benefits by exercising harder for short, quick periods.

With HIIT cardio, you will go all out for 30 seconds or a minute. You may also choose a different period that works for you. During that short period, you will go as fast as possible and use up all your energy.

Then, you will take a rest for a few minutes. During those few minutes, you might even do other types of exercise, like push-ups. You will then continue to do another short session of high-intensity training.

Air bikes are good for HIIT cardio because they engage your entire body. Also, they allow you to create as much resistance as possible, depending on how hard you push.

During those 30 minutes, you don’t take any breaks. If you go all out, you won’t be able to last for the full 30 minutes.

Most people who ride bicycles outdoors are doing it for steady-state cardio. It is kind of hard to do HIIT cardio on a bicycle outdoors.

And since people usually buy spin bikes to replace outdoor bikes, most people do it for steady-state cardio, not HIIT cardio. However, that does not mean you can not do HIIT cardio on spin bikes. Both types of bikes support both types of cardio.

Regardless of which bike you have, here is a 30-minute HIIT workout you can follow:

Comparison of Resistance in Air Bike and Spin Bike

How does resistance work on either air bikes or spin bikes? Can you adjust the resistance manually if you feel that the workout is too easy?

Air bikes use a large fan to generate resistance. The more you push and pull with your arms and legs, the more resistance you will be up against.

If you push only a little bit and are not putting in a lot of effort, you will be up against less resistance. An air bike is known as a fan bike for this reason. That’s also why it is called an air bike.

A spin bike, on the other hand, has a flywheel. This flywheel is usually a lot smaller than the wheel of an air bike. However, it can be bigger or smaller.

If you are concerned about the noise an indoor exercise bike might make, which one is better to get? Do air bikes make a lot more noise than spin bikes?

A fan bike makes a lot more noise than spin bikes. This extra noise is because it has fans that will displace air. However, that does not mean that all air bikes are excessively loud. The sound they generate is not very loud. However, it is still louder than a spin bike.

A spin bike usually will make less noise than an air bike. As such, if you need as much quiet as possible, then a spin bike might be a better choice for you.

For example, if you live in a small apartment and need to use the exercise bike outside a room where your significant other or children will be sleeping early in the morning or at night, consider getting a spin bike instead of an air bike for a bit extra quiet.

How does the body position differ when exercising? If you want to avoid stress on the back, which bike is better for you?

On air bikes, your back will generally be straight. That is how it is designed. Your legs will be on the pedals, which are straight under your body, and your arms will be operating the handlebars.

This body position may be easier on your back than the body position you will have on spin bikes. If you get back pain often and worry about the strain on your back, consider getting an air bike. Generally, the seat will be lower than the handlebars.

Spin bikes, on the other hand, usually have a forward-leaning body position. After all, it is designed to simulate an outdoor bike. On an outdoor bike, you are often leaning forward, not sitting upright.

This type of body position can put more stress on your back over extended periods, so if you get a lot of back pain and stress, a spin bike might not be the best option.

However, that does not mean that you have to arch your back to use a spin bike. The saddle is generally on the same level and is aligned with the handlebars. As such, you can sit and keep your back straight, albeit at an angle.

How do the pedals differ on an air bike vs. a spin bike? Are there straps that will help keep your feet fastened to the pedals?

As such, it makes no sense to keep strapping your foot to the pedal and then unstrapping it. With HIIT cardio, you will often use the bike for a few minutes, rest or do some push-ups, and then go on the bike again.

Pros and Cons of Air Bikes

Pros and Cons of Spin Bikes

If you are looking for a leg workout or a replacement for your bicycle in the cold weather, get a spin bike. If you are afraid of making too much noise, get an air bike.