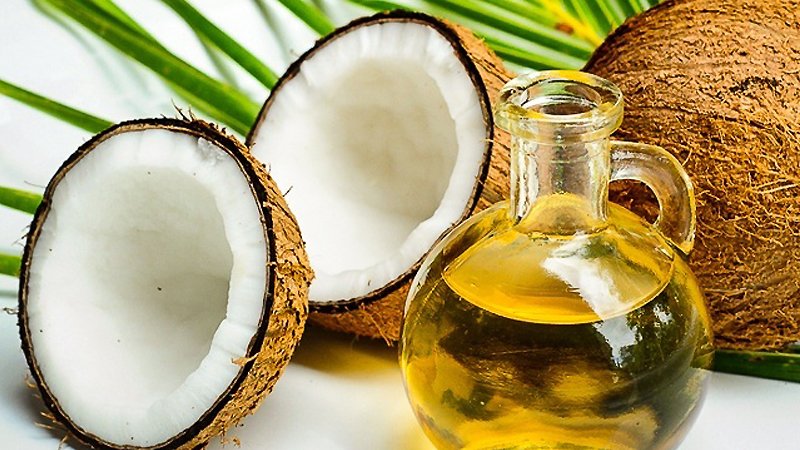 Unless you’ve been living under a rock-or maybe out of wi-fi range-you no doubt know that coconut oil is good for (apparently) everything, but putting this knowledge to practical use requires a little more in-depth information than that one positive statement.

What makes this trendy product so versatile is its ability to be used internally and externally, so while eating coconut oil has proven medicinal benefits, this product is also a valuable addition to your first aid kit, beauty routine and medicine cabinet.

We’re going to look at all of these benefits so you get the most from your jar.

As a bonus you’ll also find recipes and tips along the way to help you incorporate this healthy fat into your diet because if you don’t eat it, you won’t get the rewards.

But first, let’s look at what makes coconut oil such a superfood and what you need to know when choosing a coconut oil so you aren’t confused by all the packaging jargon. 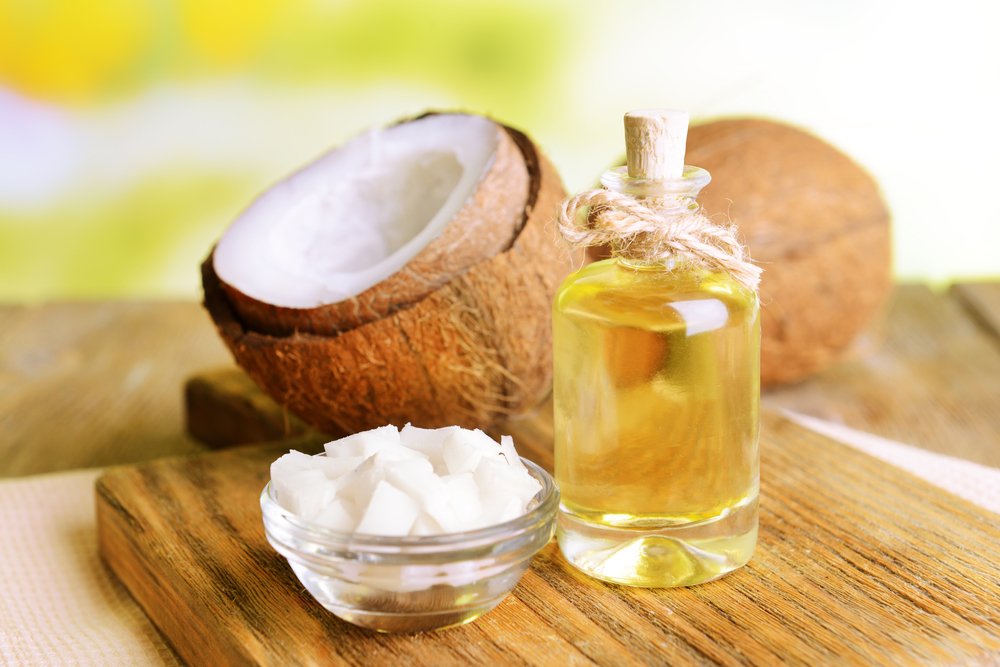 Coconut oil is 90% saturated fat but don’t let that scare you off. The fat is mostly lauric acid, a saturated fatty acid that is less damaging to your heart than traditional animal fats.

They are better metabolized by the liver as well, making it less likely that you’ll store the fat on your body if your overall calories are in check.

Their shorter chain length gives them a number of unique properties and they are responsible for many of the benefits you’ll discover below.

Another reason for the appearance of multiple health benefits in one superfood is the prevalence of amino acids, which improve and assist many systems.

Amino acids alone are able to form tissues, organs, muscles, skin and hair. It’s their building-block properties that make them popular supplements at your local pharmacy.

I’m sure you’ve seen the bottles with their claims of longer hair, stronger nails, better metabolism, an improved mood and a boosted immune system. Coconut oil naturally contains the amino acids that make those claims a reality. 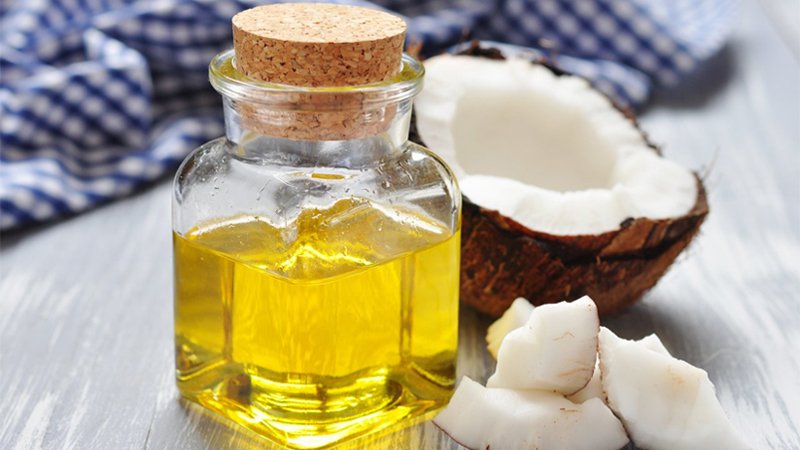 There are three common types of coconut oil: Cold-Pressed, Expeller-Pressed and Refined.

Cold-pressed coconut oils are labeled virgin or extra virgin and is extracted by hydraulic pressure with no heat or chemicals. This means more antioxidants and flavor since the coconut meat never exceeds 120 degrees Fahrenheit.

Expeller-Pressed coconut oils, on the other hand, are extracted by a screw or mechanical press, which means high temperatures, usually up to 210 degrees.

Refined coconut oil is extracted from dried coconut meat but because contaminants arise during the dehydration process, this type of oil is also bleached and deodorized.

During processing the oil can reach upward of 400 degrees, degrading many of the antioxidants, but it also produces a neutral-tasting oil with a high smoke-point, making it a good option for high-heat cooking methods like stir-frying.

When shopping for refined coconut oil, avoid brands that use harsh chemicals or partially hydrogenate the oil, a tell-tale sign of trans-fats.

If you’d like to skip the consumer research, we recommend Lucy Bee Coconut Oil, which is organic, unrefined, raw, and fair-trade certified. Plus, if you can’t find it at your local grocer, Amazon will deliver it directly to your door.

And now that you have your jar of coconut oil, let’s move on to all the ways it can benefit your health, fitness and weight loss efforts. 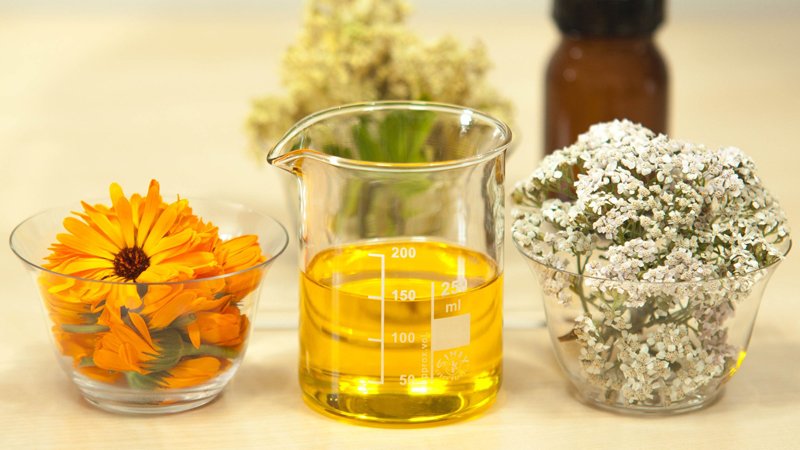 MCTs are fatty acids that go straight from the liver to the digestive tract where they are turned into ketones, which supply energy for brain cells. A 2006 study found that the consumption of these MCTs caused immediate brain function improvement in patients with mild forms of Alzheimer’s. Because they’ve repeatedly shown to relieve symptoms since, medium chain triglycerides are being intensively studied as a potential therapy. Even if you don’t suffer from Alzheimer’s, coconut oil has been shown to improve memory.

Since coconut oil is 90% natural saturated fats, it helps increase the amount of healthy cholesterol (HDL) in your body while converting the bad kind (LDL) into good cholesterol. Increasing your HDL levels promotes heart health and lowers the risk of heart disease.

Coconut oil can be used as a natural antibiotic to treat UTIs and kidney infections. The medium-chain fatty acids in coconut oil interfere with the lipid coating of bacteria, killing them.

Bonus Recipe: Craving battered fish or maybe even fish sticks? The Coconut Crusted Mahi Mahi Nuggets from All Day I Dream About Food have got you covered.

Insulin resistant cells no longer take in glucose and are a precursor to Type II diabetes.

When these cells are present the pancreas tries to compensate with increased insulin production, creating a surplus, but the fatty acids in coconut oil balance the cell’s insulin reactions and offer a consistent source of energy that doesn’t depend on glucose reactions.

The high levels of antioxidants in cold-pressed coconut oil have been found to reduce inflammation and heal arthritis more effectively than some leading medications.

Coconut oil increases the absorption of fat-soluble vitamins and minerals, including calcium. Research surrounding coconut oil and osteoporosis has found that consumption of the oil can increase bone volume while antioxidants fight the free radicals that contribute to this debilitating disease.

Bonus Recipe: If you’re a fan of lemon bars, try the crunchy Lemon Coconut Crumb Bars from Two Peas and their Pod. The coconut strudel topping makes it a tasty accompaniment your morning coffee.

#7 Reduces The Risk Of Seizures

Remember those ketones I mentioned earlier? They’re also used to treat drug-resistant epilepsy. By eating a diet low in carbohydrates but high in fat, ketone concentrations in the blood can be dramatically increased.

Researchers have found that this ketogenic diet greatly reduced the occurrence of seizures in epileptic children.

The cancer benefits of coconut oil are twofold. The energy contained in ketones can’t be accessed by tumor cells, so a ketogenic diet is a possible treatment component for cancer patients. The MCTs also kill helicobacter pylori, a bacteria that increases the risk of stomach cancer. In studies where cancer was chemically created, the use of coconut oil prevented it from developing.

The lauric acid in coconut oil helps maintain hormone balance and a 2012 study found that the consumption of coconut oil during menopause had a positive effect on estrogen levels.

Bonus Recipe: Cookie and Kate have created a Spicy Kale and Coconut Stir Fry that comes together quickly, making it a great option for weeknights.

The antibacterial properties of the MCTs make oil pulling more than a natural way to whiten your teeth. The oil lifts bacteria from your mouth’s surfaces. Removing this bacteria reduces your risk of gum and dental disease.

An overgrowth of candida in the gut can lead to it being absorbed into the blood stream where it causes everything from constipation and bloating to fungal infections and eczema.

Bonus Recipe: The Crispy Coconut Waffles with Mango from I Am A Food Blog feature coconut oil and coconut milk. Plus you can make a big batch to freeze and pop in the toaster on busy mornings.

We’ve talked about how consuming coconut oil can prevent infection due to its antibacterial properties but it can also be used topically. Since it’s anti-fungal, coconut oil can be used for diaper rash, vaginal yeast infections and fungal infections of the skin. 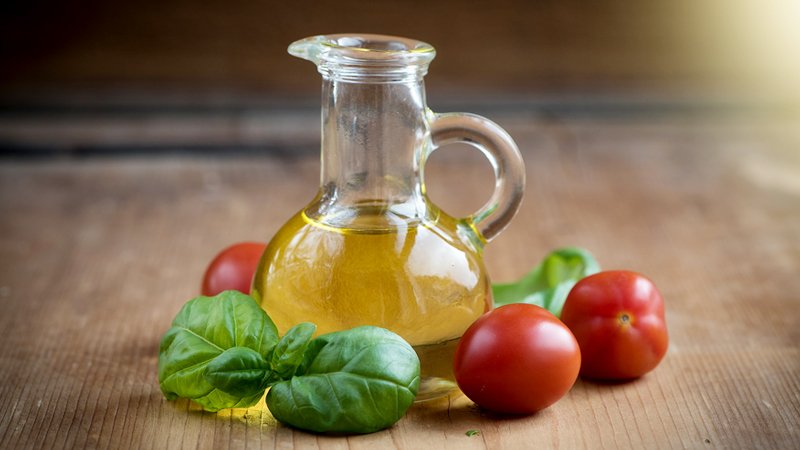 Need some help getting rid of your belly fat? A study of 40 women with abdominal obesity found that consuming 2 tablespoons of coconut oil each day, combined with 50 minutes of walking, resulted in a reduction of waist circumference. The same was true for the 20 males who noted a loss of 1.1 inches around their waists within four weeks of consuming 2 tablespoons of coconut oil per day.

Researchers published a study in the Journal of Toxicology and Environmental Health that showed an interesting side effect of capric acid injections in male rats, and coconut oil is an abundant source of capric acid. According to the study, one injection of the acid resulted in “initially rapid, then a gradual decrease in food consumption and a parallel loss of body weight.”

It’s the capric acid and medium chain triglycerides that can increase calorie burn by as much as 5 percent when you regularly eat coconut oil. Those extra 100-or-so calories a day add up to 36,500 calories a year. That’s 10 pounds of body fat, primarily in the abdominal area.

The combination of fatty acids and medium chain triglycerides in coconut oil, combined with the way they are metabolized, might have an interesting effect on hunger. In a 14-day study, six males were allowed unlimited consumption of one of three diets: a low MCT diet, a medium MCT diet, and a high MCT diet. Overall calorie consumption was significantly lower in the high MCT diet group.

Studies have shown that MCTs enhance thermogenesis, also known as fat-burning. Metabolically, the medium chain triglycerides behave similarly to carbohydrates in that they provide a burst of energy (fat burning) which contributes to an elevated metabolism with long-term consumption.

MCTs prevent muscle loss (it’s given to critical hospital patients intravenously) because of the production of ketones, which ensure muscles are a last-resort for bodily fuel. At the same time, the amino acids in coconut oil are effective at growing and repairing muscles. Be aware though that many muscle-building products and milks use processed MCTs, so consider supplementing with coconut oil for a natural source.

Bonus Recipe: If you’re a fan of rice krispie treats you’re in luck because Lovely Little Kitchen has worked out the details and added coconut oil to their Coconut Oil Rice Krispie Treats. 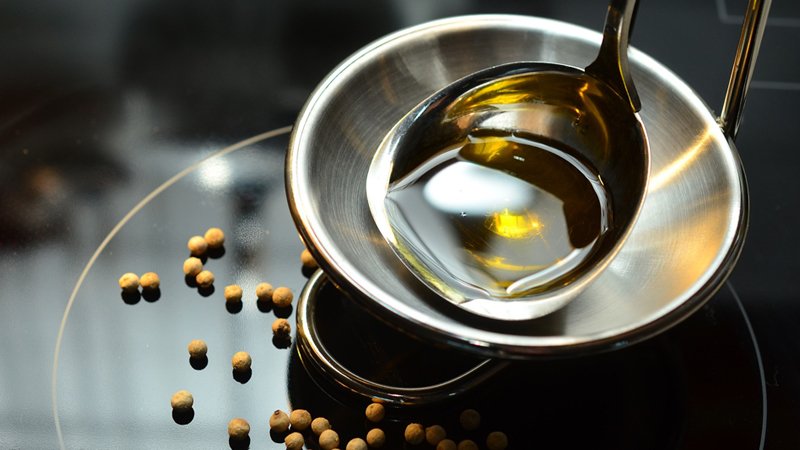 In addition to the health benefits we’ve explored, coconut oil is also a marvelous addition to your beauty routine. It protects hair from sun damage (coconut oil blocks 20% of ultraviolet rays) and heat damage when used sparingly as a leave-in.

Coconut oil can treat psoriasis and dandruff. Not only do its antimicrobial properties kill any yeast or bacteria that could be causing scalp issues, the oil itself serves as an intensive moisturizer.

Applying coconut oil to hair, along with a diet rich in Omega 3s, can help it grow longer and thicker. Oil treatments can also prevent and repair hair loss since the nutrients in coconut oil penetrate the hair shaft and improve hair’s overall health and appearance.

You can use it to moisturize more than your scalp by applying the oil to your skin and chapped lips.

Antioxidants are good for more than fighting disease. They can also slow the visible signs of aging by preventing lipid and protein oxidation. Coconut oil supports healthy liver function which helps it better do its job, detoxifying chemicals and toxins that would otherwise influence appearance.

Embed This Image On Your Site (copy code below):

Add Coconut Oil To Your Diet

To see these benefits reflected in your own health, be sure to incorporate coconut oil into your diet, preferably in place of less-healthy fats. You can replace the oils and fats you use for baking and sauteing with coconut oil or add a dollop to your morning smoothie or coffee if you rarely cook.

We suggest adding a daily superfood scramble or hash to your diet cooked with coconut oil. The combination of oil and superfood health benefits will create a foundation of eating that will improve your well-being…and you’ll get an extra serving of vegetables.

Already using coconut oil? Tell us in the comments below what benefits you’ve seen so far.